"How It All Began" by Eric Cornish

After discharge from the army in March 1943, I took the first opportunity to attend a Families Meeting (unflatteringly known as 'Gin and Tears') held at Lord's. The 3rd [CLY. Ed] held theirs at the Bridge House Hotel, near London Bridge. Every month, mothers, wives and families were drawn together to exchange news over cups of tea. The benefits were immeasurable. Although run by a committee of ladies, the Hon, Terence Eden MC was drawn in at the inception since, due to age and doubtful health, he had reluctantly left the army at the time the Sharpshooters went overseas. He had been co-opted onto the committee and once said that committee meetings were rather like the Somme. I was not at the Somme, but they were lively as I found out when I, too, was co-opted! 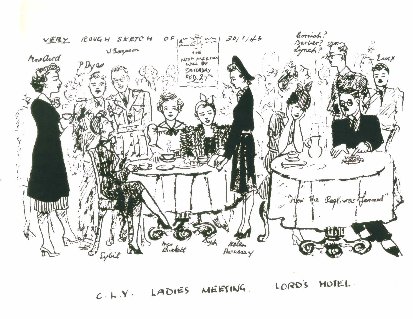 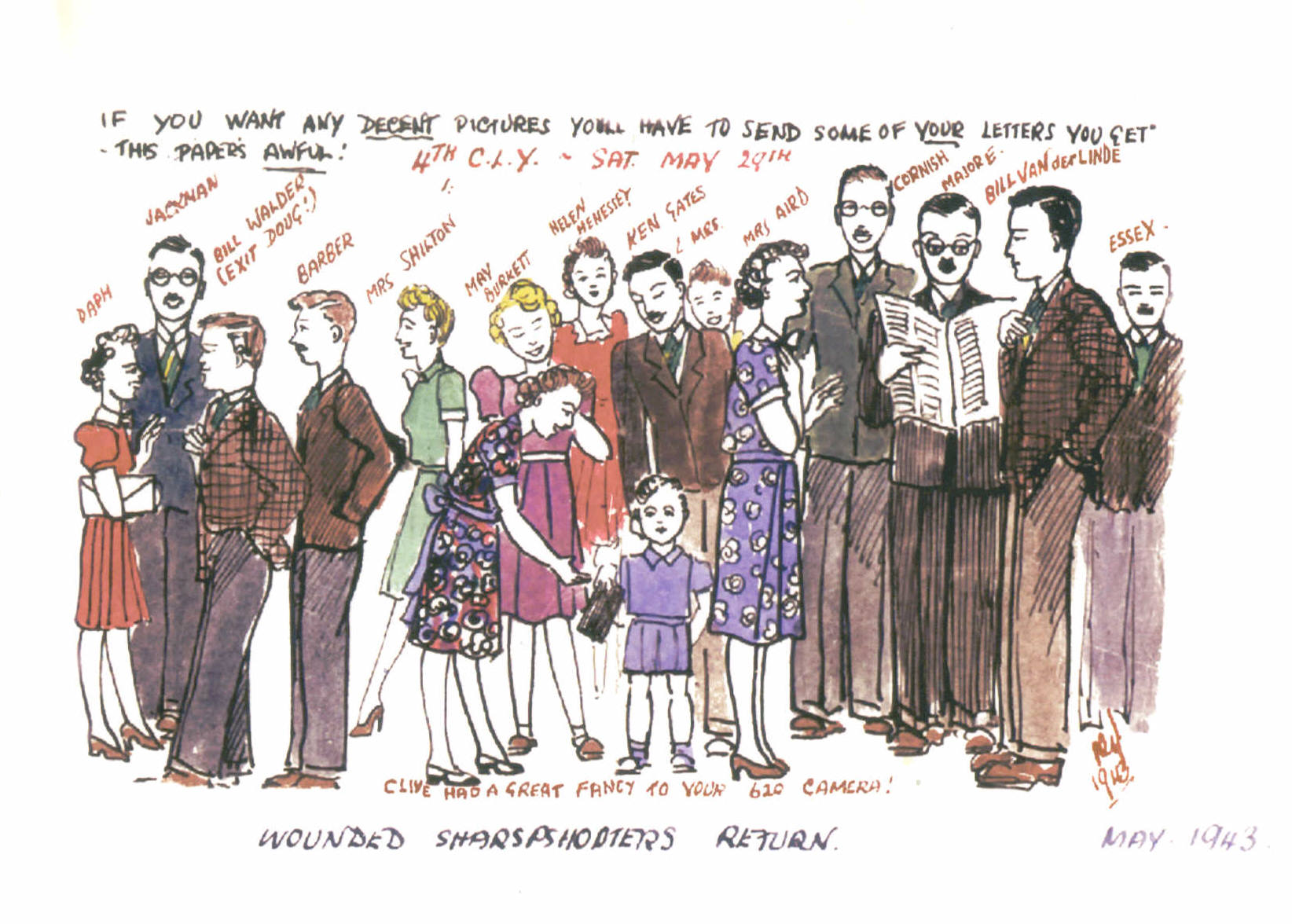 I think that it was at the June 1943 (28 August - see sketch. Ed) meeting that Colonel Bill Carr DSO (soon to be a Brigadier) attended and instructed Terence Eden and myself to form an Old Comrades Association for the 4 CLY. 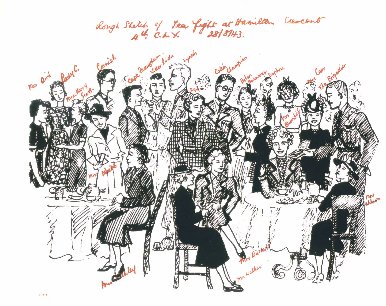 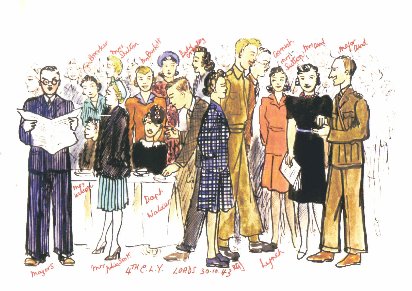 A few days later over luncheon (Terence was a notoriously generous host!) I agreed to be Hon. Secretary (so I was told later) and was charged to find suitable civilian Sharpshooters to form a committee. At that time, Jumbo Jackman, Dick Essex and Norman Mew were available and agreed to serve. They proved to be energetic and worthy aids in those early days of finding a way into a set-up about which we knew nothing.

A regular meeting place needed to be established so that any Sharpshooters in London would know where and when to find us. In a beer-starved city this was to prove difficult. The committee became engaged in the onerous task of calling at pubs in the hope of enlisting the co-operation of publicans. Only sympathy was offered, none had beer, nor, in most cases, accommodation to offer. Then, after about two months, by a chance lunchtime call at the Cock Tavern, Great Portland Street, our luck changed.

George Evans, ex-Captain, Royal Fusiliers, World War 1, offered one session at the end of August 1943. We stayed until 1946. During this time we had use of the first floor restaurant on the last Friday of every month, George saving his precious beer to ensure this - except once when he telephoned 'Sorry, no delivery at all this week but come if you can bring your own beer.'

This was post-amalgamation and I am sure that it was Jimmy Sale who organised a barrel of beer to be delivered by a rival brewery. It was set up for us and even the customary sandwiches were provided by the memorable Miss Gertrude, George's sister.

George Evans was indeed pro-Sharpshooter. Often he would have to close the pub long before closing time, but we were always allowed to stay until 11 o'clock. He died soon after the war and never knew the long-term influence he had on the life of the Association.

I mentioned the amalgamation. News of this came as a great shock and we feared leaning of the circumstances that had brought this about [Villers Bocage. Ed]. Then - how would this affect the Association? We had heard nothing of a 3rd OCA. It was a telephone call, later, from Colonel Sandy [Cameron. Ed] which clarified this. There was one.

I met for the first time Colonel King Jago. I was deeply impressed by him; a quiet, positive, reassuring man who dispelled any doubts that I had, and in turn those of my committee colleagues, that one Association should serve all Sharpshooters. A meeting was called in the autumn of 1944 with Sandy Cameron (in the chair), King Jago, Bill Carr, myself and Jimmy Farrer, Chairman of the 23rd London Armoured Car Company Sharpshooters, veteran of World War 1. Having previously had Bill Carr's views, I was prepared for his disapproval of a combined Association. He wanted the 4th to retain its sole identity but he was alone and sadly disassociated himself from us thereafter. It was a difficult meeting.

The 23rd Company OCA had been reduced to a few member, all of World War 1, but much support was given in particular by Jimmy Farrer and Sidney Baker who son, Zaz, was serving with the Regiment. Jimmy has offered to approach a 3rd Sharpshooter, one Bill Vokes, to be joint Hon. Secretary with me since I had been asked to continue in that capacity. By coincidence, Bill and I had met in Oribi Hospital, Pietermaritzberg, when I took over his job in the Registrar's office on his departure home. His agreement brought about a close and lasting friendship that helped enormously in setting up the combined association. This was achieved with substantial help of many Sharpshooters, 3rd and 4th, who had been discharged from the army. The Regiment provided useful information and from all ranks a voluntary one day's pay a month made secure our slender benevolent fund.

The objects of the restructured Association remained unchanged in holding the membership together and in disbursing funds to dependents who had hit hard times. In late 1945, we enlisted the professional help of the Cavalry Benefits Association, latterly the Yeomanry Benevolent Association, in researching cases of hardship and ....today...grants are mostly made to Sharpshooters themselves and to widows of Sharpshooters......there is so much more that could be told, of crises, events, incidents, parties, humour - but let me conclude this saga by briefly mentioning the Newsletter which was started in 1944 using a World War 1 Roneo Duplicator costing £5! It was always difficult gathering material. It still is! Do help the Editor by writing something - even if it occupies only a few lines."

Read the latest news from the Association